Sambalpur is one of the most important cities of Western Odisha. Being situated in the lap of nature Sambalpur has a vivid culture mixed up with that of the modern and the tribal culture of the forest region. The language, festivals, songs and dances and everything is deeply connected with the cultural heritage of Sambalpur. 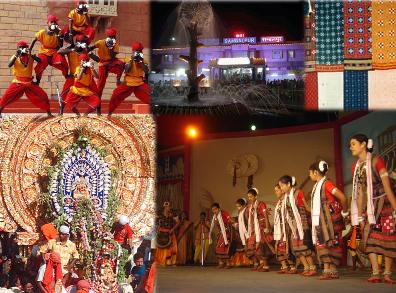 Language, Dance and Music of Sambalpur

Kosli Language or Sambalpuri Language
The Sambalpuri language which is one of the form of traditional Odiya language, mixed up with the tribal touch in it. It is primarily known as Kosli language which is believed to be the Indo-Aryan language of Western Odisha. Once considered a dialect of Oriya language, it is now recognized as a distinct language. It is one of the distinctive features of the residents of Sambalpur. There are basically 2 language group in Sambalpur. One is the group of Dravidian language spoken people and the other one is called the Mundari language group.

Sambalpuri Dance Form
The Sambalpuri dance forms are mostly performed in order to convey the prayers to the deities. The dances forms which are most famous in the District of Sambalpur are the colorful folk dance forms. The Sambalpuri dance is also a folkloric dance form, which has its roots in the western part of Odisha. A dance form named Dhalkhai is performed by the young girls of several communities of Soura, Mirdha and Binjhals tribes during Bhaijiuntia, Dussehra and several festive occasions. These young girls form a queue or form a semicircular formation and sing the traditional songs which are known as Dalkhai songs.

Karma is one of the most famous dance forms of Sambalpur district, which is basically a tribal dance which is performed in the honor of the deity of the tribal people residing in the forests of Sambalpur, Karam Sani", which is believed to the one who grants children. The dance is being performed in a proper format since ages and in the beginning of the dance the dancers enter the dancing arena making two rows on the rhythm of the music played by the accompanied drummers and the singers. Bauli and Humo are believed to be some of the most favored dances which are performed by the unmarried young girls on several special occasions. The steps of the dances and the moves are a bit of slow in compare to the other dances. Koisabadi dance is the famous dances which is prevalent mostly among the tribes of the Bhuyan and the Gond. A two feet long stick is held by the male dancers in this dance forms and several acts are also performed with it. The songs that are played are mainly based on the story of Lord Krishna and Radha.

In the past from the very beginning of the Sambalpuri dance forms till now, it has faced several changes in order to make it more comfortable, attractive and more influential irrespective of the factors affecting it such as the dialectic, the climate and the behavioral diversity of the people of Sambalpur. Previously this dance was performed to propitiate the gods, to pacify the invisible tiny soul also known as atma and to fight against the evil. These dances were performed during marriages, festivals, fairs, and also during the time of harvesting the crops.

Music of Sambalpur
The district of Sambalpur has developed and nurtured several distinguishing styles of folk art forms. Dances and Music are connected with the lives of the people residing in Sambalpur and the entire western part of Odisha. The style of dances also abides the ample aroma of uniqueness.
The folk music of the district of Sambalpur and the nearby areas has an influence of the emotional eruption of the people. These not just address the rudiments of lifestyle of the western Odisha but also describe the beauty of nature. Music is said to be an inseparable part of the culture of districts of Sambalpur. Nuakhai, nuakhai and the Sital sasthi are some of the most common festivals of the entire western Odisha, Sambalpur being the prime city is known very much for the grand celebration of these cultural festivals.

The Folk Instruments
Dhol, Nishan, Tasa, Bansi, Bir-Kahali, Ektara, Gini, Ghunguru, Ghulgula, Madal etc are some of the most famous Folk instruments. Among all the Dhol is said to be one of the most used and also old age Folk Music instrument of Sambalpur. The Dhol which is used in the districts of Sambalpur is believed to be somewhat different than that of the Dhol in the rest part of the country. The Dhol here is different in its making, being made of the trunk of a tree, both the side of the Dhol are of same size. The Madal used in Sambalpuri is also very much dissimilar from that of the other parts of country due to its built up and usage. The Madal being used here is said to be cut out of the fired clay and is then cylindrically shaped. The Madal is basically a drum used in playing slower rhythms. Madal is used to play during the songs which are mostly dance less. Another famous instrument used in the Sambalpur during festival is known as the Nishan which is cut out of the iron sheets which produces the most heart throbbing sounds. It is mostly used for the worshiping of Goddess Durga or Goddess Kali and also in the battle field.

The famous festivals of Sambalpur portray the vibrant culture of the western Odisha. There are many common and uncommon occasions and events which are celebrated at Sambalpur along with the rest of Odisha.

The traditional Marriage Ceremony of Goddess Parvati and Lord Shiva calls for the festival of Sitalsasthi. The celebration of Sitalsasthi is done in the months of June extended for a week. Several pilgrims of the neighboring districts of Bihar and Madhya Pradesh also take active participation in this festival. Thousands of people from all over the Odisha gather in this weeklong festival of Sitalsasthi. This is a festival celebrated in the memory of the event which took place before some 400 years and is still being celebrated with full swing and enthusiasm among the people of Sambalpur and nearby places of it.

Nuakhai is one of the most important festival of Western Odisha and Sambalpur being one of the most prominent cities of Western Odisha celebrates it with a great spirit. The festival of Nuakhai is celebrated in the month of Bhadrab and on an auspicious day which is then fixed by the astrologers. The preparation for Nuakhai starts before a fortnight and people eagerly look forward for the festival. Before the festival of Nuakhai the houses are cleaned, plastered and are also decorated wonderfully by the ladies of the houses.

On this auspicious occasion of Nuakhai, the old and the young, everybody dresses up with new clothes. The festival of Nuakhai is a symbol of celebrating the new rice of the year which is being eaten up from the day it is celebrated. Get-togethers take places at the houses and friends and relatives meet up, sing, dance, and lots of merry-making happens as a part of the festival. The first grain of the paddy crop is chopped on this occasion and is then cooked into various dishes which are then offered to the deities. After the offering to the Gods the eldest member of the family gives away that to all the kids and junior members of the family. Nuakhai is one of the community festivals which is celebrated with lots of spirit by all member of a Hindu family.

Ratha Yatra is a very popular festival of Odisha which is not only celebrated at Puri but also at every corner of the state and even many places of the country and abroad as well. With the highest number of Jagannath Gudis in Odisha, Samblapur marks the celebration in a grand way. The districts of Sambalpur have at least of one Jagannath temple in every revenue village of the entire district and most of them celebrate the festival of Ratha Yatra every year. This festival is a symbol of popularity and fame in Sambalpur.

Bhai Juntia festival is a festival celebrated with great devotion on the Mahastami day of Durga Puja. Girls and women observe a whole day fast on this occasion for seeking the blessings of Goddess Durga for a long and healthy life of their bhai, which is the term used for brother in Odiya language.

Women of Sambalpur observe fast on the day of Puajiuntia festival to invoke the grace of Lord Dutibahana for the prosperity and long life of their sons.

There are several other Hindu festivals which are celebrated in Sambalpur with a great enthusiasm, like Janmastami, Ganesh Puja, Durga Puja, Shiva Ratri, Saraswati Puja, Dola Yatra and many more. A huge fair is organized at Huma, where the leaning temple of Lord Shiva is located on the occasion of Maha Shivratri which witnesses thousands of devotees across the state visiting the fair.

Another huge fair also gets organized during the Makara Jatra at Themra of Sambalpur district. The Sikh community people of the district celebrate the festival of Guru Nanak Jayanti as it is believed to be one of their important festivals. The Muslim community also celebrates their festival with equal level of enthusiasm. The festival like Eid Ul Fitr, Muharram and Id ul Zuha being the important festivals of Muslims are celebrated with great festivities in Samblapur.

The music, dances and festivals are the prime contributors to the richness of the culture of Sambalpur. These also reflect the ages old rituals and tradition of the glorious past of the people of Sambalpur district.

Sambalpuri sarees have gained recognition across the world for its beauty and finest texture. Locally called shadhi, it is hand-woven ikat which is also the traditional outfits of Odisha. The specialities of these saris are the warps and the weft which are tie and dyed before being waved.

The Sambalpuri sarees, also known for their decoration done on it with the traditional motifs like phula (flower), chakra (wheel) and shankha (shell) which all have the deep symbolism, but among all the highlighted feature which these saris posses are that these saris are the traditional craftsmanship of the 'Bandhakala' of the Odisha.