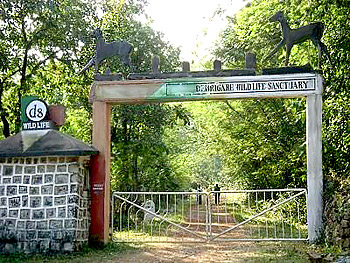 Surrounded by villages like Lambipalli, Debrigarh, Mundakati and Jhagadabehera the Debrigarh Wildlife Sanctuary is also famous for its intensity of the flora and fauna found here. The forests area of the Sanctuary is said to be occupied by the wild animals like the species of sloth bears, tigers, leopards, nilgais, sambars, and the chitals, along with a very wide range of the migratory birds which includes the extinct crested serpent eagle and the Chousingha. There are also several freshwater turtles and mugger crocodiles which make the forest vicinity much colorful. The level of vividness of the Debrigarh Wildlife Sanctuary can be judged by the number of species that are found here and the area which is covered with the lush jungle. It is said to be one of the vibrant wild life sanctuaries of the country.

The best part of the Debrigarh Wildlife Sanctuary is the sighting of some of the very famous animals like; the gaur, leopards and the chausingha (antelope with four horns). The sightings at Sambar are also very much famous in the areas of the sanctuary. Chausingha and the gaur are believed to some of the very famous species ofound only at the Debrigarh Wildlife sanctuary which has several other species of animals also present here. As per the records it is said the Debrigarh Wildlife Sanctuary witnesses the maximum diving ducks during winter season in compared to all other sanctuaries of Odisha. Crested grebe and the red crested pochards can also be found at the sanctuary.

According to the 2008 bird census, the sanctuary has been reported to have the most number of winged-visitors and it was estimated to be around 33 thousands. For the animals like Chousingha, the forest ambience is said to be the best environment and Debrigarh Wildlife Sanctuary is said to be the most suitable for it. The other prominent fauna found in the Debrigarh Wildlife Sanctuary include the breeds of sambar, leopard, spotted deer, tiger, moijitor lizards, sloth bear, migratory and resident birds, chameleon and gaur etc.

There are several other tourist spots near the Sanctuary famous as the picnic spots. People of Sambalpur visit these spots during the winter months as the atmosphere during that time becomes very pleasant. The wild animal conservation centre (WACC) at Motijharan in Sambalpur is a famous deer park which serves many recreational avenues for visitors. It also serves as a rescue centre for wild animals. The Hirakud Dam project is also one of the major tourist attraction near the Sanctuary. The Cattle Island near the Hirakud is also a famous tourist spots of Sambalpur visited by many tourists around the year.

Importance of Hirakud Dam for the Sanctuary

The reservoir at the Hirakud Lake is the centre of attraction for several migratory birds during winter and as the dam still water reservoir, and one can also find a huge variety of diving ducks here. One third of the boundary of the Sanctuary is being bounded by the Hirakud dam and it also forms a mini catchment area for the reservoir. The dam also forms a source of water supply during the summer when the water within the sanctuary dries up. This area is home to a wide array of fauna and is also supported by the flora, which forms a part of the habitat. A fertile ground for grasses is formed by the banks of the reservoir and it also offers reeds to grow. These areas also endow with an excellent breeding ground for migratory birds that arrive during the winters.

There are several eco-tourism cottages available at the Debrigarh Wildlife Sanctuary near Barkhandia and all the facilitated with best of the best accommodations. One need to avail the permission which is available at the gates of the Sanctuary to enter inside it, but DFO’s has the authority to allow permit for the stay at the cottages which can easily be availed from the offices at the Sambalpur after paying nominal charges.

How to Reach Debrigarh Wildlife Sanctuary

Sambalpur is the nearest well connected town to the sanctuary that connects it with rest of the world. By road one can reach the sanctuary from Sambalpur in just 1 or 2 hours. Public transport such as buses and taxis are also available from the city of Sambalpur. And to reach Sambalpur there are several trains that connect the city to several other cities of the state as well as the country. Bhubaneswar airport and Raipur Airport are the closest Airports located at a distance of 300 and 270 km respectively from Sambalpur.