Huma is a small hamlet, which is located on the left embankment of the River Mahanadi. This hamlet is positioned nearly 23 kms southern part of the Sambhalpur at the beautiful state of Odisha, India. Inside this hamlet, there is an eminent temple which is devoted to deity Shiva. This temple of deity Shiva was built in 1670 AD. This leaning temple was constructed by the ruler known as Baliar Singh who was the 5th ruler of the kingdom of Chauhan of Sambalpur, Odisha, India. This ancient temple is well recognized as Huma’s Leaning Temple, as this temple is not standing straight and is little skewed to the one direction. In fact, more or less the whole thing contained by the temple compound is tilted. 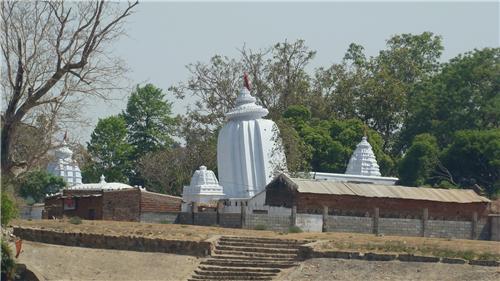 During special occasions these fish have been called by the names that are given to them and the God’s offering is given to them. This is considered as one of the important activities of this leaning temple. In addition, the travelers can also take pleasure in the boat ride inside the Mahanadi River to a number of small islands.

History of Leaning Temple of Lord Shiva at Huma

There is a fascinating history connected with the establishment of this Huma temple. In accordance with the local people, a milkman was there, he used to roam across the river Mahanadi for worshiping deity Shiva. That milkman used to give milk to deity each day. One day, he got surprised by seeing that, the idol which was made up of rock, consumed that milk which was offered by milkman. This unbelievable incident cemented way for construction of this present leaning temple.

The Structure of Leaning Temple of Lord Shiva at Huma

This temple is situated on rocky cradle presently on the embankment of the Mahanadi River. The source of the leaning can’t be understood to be technical defects at the period of the building of this temple. It is not simply acceptable as well that the weak groundwork might be the reason for the leaning condition of this temple in Huma. In fact, building of temple is pretty favorite of the rulers of the Chauhan as known from countless temples that were constructed during the reigns of Chauhan Kings.

There may have been some interior dislocation of rocky bed at which this temple is standing, either because of flood current inside the Mahanadi River or earthquake, therefore, by affecting straight position of this original temple. In different word, the base of this temple has moved away to some extent from the original arrangement of this temple and because of which, the structure of this temple has skewed. No denying of the fact is there that it has captivated the interest of the sculptures, history lovers and many other researchers.

A most amazing thing is that, the chief temple is skewed to one side and the other little temples are also skewed to various other directions. Inside the temple compound, each thing is witnessed to be like in a tilted state which includes the borders and also the direction of the inclination has not altered from the time of last 40 to 50 years in accordance with the local people of that village and the priests of this leaning temple. The cause of this lean might be because of some geological cause, may possibly because the earth’s outer layer is not level in this structure of this temple. The position of the inclination is until now to be calculated.

Festivals Celebrated in Leaning Temple of Lord Shiva at Huma

The finest time to come to this leaning temple is from October to March. As during this time the weather condition of Huma remain pleasant and also many fairs and festivals are organized in the temple during this period of time like the Shivratri which is among the significant festival for the main deity of this temple which is the deity Shiva.

How To Reach Leaning Temple of Lord Shiva at Huma

By Road – Huma is about 23 kms towards the southern direction of Sambalpur, Orissa. Huma is well linked with Sambalpur and other cities and towns of Orissa by Road. After reaching Huma one can easily get to the leaning temple which is inside the village of Huma.

By Air – The closest airport to Huma is Bhubaneshwar. Bhubaneshwar is approximately 290 ms away from Huma. Outside the airport one can easily get taxis and cabs which will take them to their desired destination that is the famed leaning temple in Huma

As Huma is a small hamlet, so, the closest options for the accommodation of the tourists and the devotees are in Sambalpur city, which is only 23 kms away from Huma. A huge number of hotels and guests houses are there in Sambalpur. These hotels range from luxury hotels to budget hotels. Some of these are given below:


Explore more about Tourism in Sambalpur