Located at 64 km from Sambalpur Nrusinghanath is a place of pilgrimage in Padampur Subdivision on the Northern flank of Gandhamardan hills of Western Odisha. Nrusinghanath is famous for the temple of Vidala-Nrusimhanath. According to Oriya and Devnagari inscriptions, it is believed that the temple was built in the 14th century by Baijal Dev, though an earlier form existed from the ninth century. 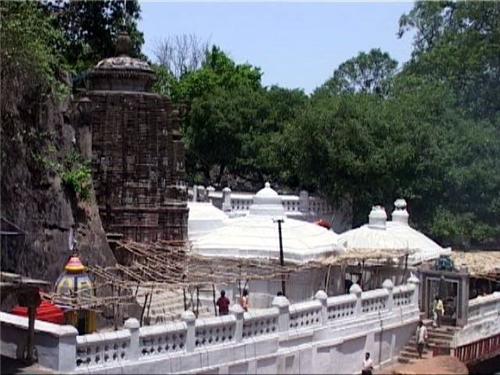 Chinese traveler Hieun Tsang of seventh-century also visited here and was spell-bound by the beauty of the temple of Vidala-Nrusinghanath. As per Tsang, there was a Buddhist University of Parimala Giri which was located just near the hills of Gandhamardhan. On the other side of the hill there lies the Harishankar temple which is also equally famous. Between the two temples there is a plateau of 16 km plateau where it is believed that Buddhist University of Parimalagiri once existed. According to the Hindu mythology, the hills of this region are considered to be very sacred, and were supposedly carried by Hanuman from the Himalayas while he was on his move to save Laxmana’s life when he got hurt by the attack of Inderjeet.

The temple of Vidala-Nrusinghanath is located at a distance of 113 km from the city of Bargarh which is also well connected from the Sambalpur by road. The water fall at Nrusinghanath is one of the mesmerizing waterfalls of the state located right at the foot of the Gandhamardhan hills. It is believed that exquisitely carved relief carvings have been preserved at a remote enclave where presently the waterfall is located. Lord Nrusinghanath is a much-adored deity of Odisha and a great fair huge fair takes place at Nrusinghanath Temple in his honor on the 14th day of bright fortnight in the month of Vaisakha, the Nrusinghana chatrurdasi which mainly falls in the month of May, where thousands of pilgrims from all over the stare visit the place.

As per the historical evidences, some 600 years back a woman named Jamuna Kandhuni which is also referred in the books of “Nrusingha Charitra”, composed a Kavya that sings the glory of Marjara Keshari with regards to the suppression and repression of torture and tyranny of Musika Daitya. It is believed that when Musika Daitya who is said to be the incarnation of Mouse Demon as per the mythology, became much aggressive and his acts towards the human breed when turned very cruel, Vishnu Mani appeared in the appearance or Avatar of Marjara Keshari. It is also said that due to the fear of Marjara Keshari the demon ran into his house under the tunnel and never came back. Till that day Marjara Keshari awaits him to come out of his house and can destroy him. In the memory of this historical incident the Nrusinghanath temple is made where the idol of Lord Nrusinghanath is being established which is believed to be the protector of the humans from all the demons.

The temple is situated at the foot of the hill, and is surrounded one of the thickest jungles of the Central Provinces from almost all of its sides. A streamlet, named as Papaharini is located closer to the temple and the water of it is believed to be very sacred. Papaharini accumulates itself into five pools at five different places at the temple, which are known as Kundas. The hill is that much overgrown with numerous tall trees and shrubs that sunlight cannot enter through them. Higher upon the hill towards the South-East near the first Kunda, there are four colossal figures, carved out of the rock. They are shown as the first four of the five Pandava brothers. Close to the northern door of the temple there is another figure carved out of the rock, which is pointed out as that of Sahadeva, the fifth Pandava brother. Near to that, there is another colossal figure of Ganapati is also carved out. There is also a nicely chiseled pedestal with seven horses at its front, is carved near the broken sculptures that stretch out loosely. The image which was originally set up on it was of God Sun.

The temple of Nrusinghanath faces the East and has a shrine along with a hall which is called Jagmohan. Right in front of the temple there is a pillar known as Garuda Stambha, with a small niche at the top where a lamp is enlightened during the Diwali festival. The walls of Jagmohan which can be seen now are rebuilt as the earlier ones go damaged. It is believed that the doorframes have been crafted in the 11th century. It originally had three doors, facing the east, north and south, but now only the first two are remained open and the third one is being blocked up and replaced with masonry work. All the door frames are of dark color stone and are also beautifully carved.

There are several well- preserved relief sculptures found near the temple which include goddess Ganga and Yamuna, Nandi, Jay-Vijay, Hanuman, Kartika and Shiva-Parvati, three avatars of Lord Vishnu namely, Baraha, Nrusingha and Bamana, eight-handed Ganesh and cowherd Sahadev. Ther is a small image of Marjarakesari located inside the shrine which is said to be the form of Vishnu with the head of a cat and the body of a lion. It is thickly swathed in cloths and has its nose, eyes and mouth made of brass. A long description of the genesis of this incarnation of Vishnu has been set forth in a local Mahatmya which is being composed in Odiya. There is also an inscription in Proto-Odiya script and in Oriya language on a slap of black stone in the temple.

There are several other tourists attractions are there near the Nrusinghanath temple. Chal dhar, Sita Kunda, Bhim Dhar, Panhupandav, Kapil Dhar, Supta Dhar, Satyaamb, Bhim Madua and Happy Point are some of the few famous tourist attractions near Nrusimhanath. In recent years tourism has been developed around the Gandhamardhan hills. The annual fair held on Nrusimha-chatrurdasi also attracts several pilgrims from far and near. There is also a Beautiful Garden created just near the temple, where Lord Krishna different avatar shown and also a 28ft Hanuman Statue created inside the center of Garden.

How to reach Nrusinghanath Temple

The famous Nrusinghanath Temple located at about 110 km west of Baragarh and 64 km from Sambalpur. Khariar Road Railway Station is the nearest railhead. Bargarh town is on the National Highway No. 6. Both Sambalpur and Bargarg are well-connected by bus to other major cities of the state such as Bhubaneswar, Berhampur, Rourkela and Cuttack.