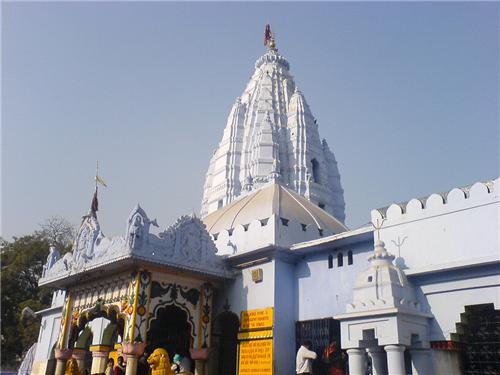 Legends Related to the Samaleswari Temple

Narasingh Dev ruled the independent kingdom of Patna during 1540 AD to 1547 AD. Patnagarh, small town located on the bank of River Mayabati was the capital of the dynasty. Once during a midnight of Sravana month as per the Hindu calendar, the queen of King Narasingh Dev had a severe labor pain and her life was in danger. There used to be an old lady who was believed to be an expert and was also experienced in the delivery process of women, but the point that she used to live on the other side of the river where Mayabati, which was on its full swing in those days.

The younger brother of the King Narasingh Dev, Balaram Dev swam across the flooded river to bring that old lady in order to rescue the queen and later on the queen had a baby boy which was then named as Hamir Dev. Very much impressed with the act of his younger brother Balaram Dev King Narsingh Dev granted a very huge territory in the favor of his younger brother which then became the kingdom of Huma. As the years went on the queen-mother once asked her sons Balaram Dev and Narasingh Dev to take her to the Kalapathar, which is a place located on the river Anga bank. She stood at a place near the river and pointed towards the kingdom of Patna and declared Narasingh Dev would be the king of that territory and Balaram Dev her younger son would be the independent king thereof. From then the Huma territory came into existence and which was then transformed to the kingdom of Sambalpur.

It is said that during construction of the temple a person would be the independent king thereof along with his wife were buried in its foundation as there were the tradition of human sacrifice was there during that time, which then later on became a practice of sacrificing buffalos. Later on this practice was also abolished. As per the temple records the last buffalo which was sacrificed was some three decades ago. There is also a story of a miracle that happened at the temple of Goddess Samaleswari with one of the saints of the Amritsar who later on became the Mahanta of Gopaljee Math and who was the reason behind abolishing the practices of human sacrifices in the temple.

A special stone is used as the construction materials in constructing the Goddess Samaleswari temple which is believed to be much stronger that of the Granite. The stones are then cemented with that of the lime mortar. The entire temple building is plastered but due to the rain, weather and many other climatic conditions the temple structure has became stale.

The Samaleswari Temple structure is divided into two different structures. Square shaped sanctum sanctorum which enshrines the deities is situated at four steps below the 10’ feet wide circumbulation which is covered and is also supported by the 12 stone pillars. 11 idols of Parswa Devis the side Goddess are also embed on the outer wall of the sanctum which allows the devotees to worship them while performing the parikramas (rotations). The plinth of the Structure of Samaleswari Temple is around 16’ high and the building is structured in square shape above the plinth. The arch of the temple of Goddess Samaleswari is supported by eight abutments, along with the arched roof, which commences at a height of around 18 feet and gets tapered till 35 feet.

A wide area is also there on the extreme northern side of the Samaleswari Temple which separates the main temple with some 16 odd pillars constituting the audience hall, also known as the sabhaghra. Eight artificial temple motifs are used to decorate the prime part of the temple and on the larger motifs faces towards all the sides and the smaller ones focuses towards the four corners of the temple. The motif which faces towards the North has got an arched opening which then recommends towards the main entrance of the holy temple. 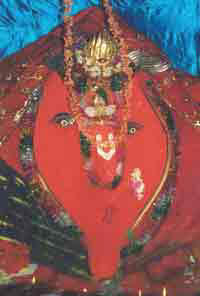 The idol of Goddess Samaleswari is established right at the centre of the temple and is said to be the most loved and worshiped deity of the entire Sambalpur district. The statue of Goddess Samaleswari is made up of the Granite rock and it has an inverted crate type of projection at its bottom. A slight thin cut on the “Baraha” of the idol like face symbolizes to be her mouth. There are also two beaten golden leaves fixed as the two uneven golden eyes of the deity which makes the complete rock as a face of the Goddess Samaleswari. All these elements justify the rock piece as the shape of the face of Goddess. One of the most ancient traditional nose ornament made of pure gold is also hanged on the imaginary nose of the rock piece.

There is a common belief among the people of Sambalpur that the Goddess Samaleswari give power to the sentiments of devotion, fear, affection, awe and reverences within all the devotees who visit the temple of Goddess Samaleswari from all parts of the world to get the blessings of the deity of the entire district of Sambalpur and the western Odisha.

Location of the Temple